Dubai To Achieve Net-Zero Emissions By 2050

Green Hydrogen Plans Of Saudi Are A Game-Changer – ENGIE CEO

Green bonds have become a key financial instrument for mobilising cost-effective foreign debt capital into the Indian renewables market. Since 2016 Indian corporates and financial institutions have raised around US$14.43bn through green bonds as per Bloomberg New Energy Finance (BNEF) data. In 2021 to date, Indian companies have attracted US$4bn in green bonds, already beating the previous record of US$3.43bn in cumulative green bond issuance in 2017.

The importance and popularity of Indian green bonds are likely to increase: they offer an opportunity for clean energy companies to leverage global finance for projects that will help India to meet its renewable energy (RE) targets and relatively higher and less volatile yields for global investors.

August 2021 saw India achieve 100 gigawatts (GW) of installed RE capacity (excluding large hydro). While this is indeed a landmark, the country is still far from achieving its RE target of 175GW by 2022. India would need to install 75GW in the next 19 months to achieve the target by the financial year 2022-23. A quadrupling of current install rates is needed to deliver on India’s even more ambitious target to install 450GW of RE capacity by 2030.

Global capital is ready, willing and enabled to invest the US500bn the Indian renewable energy sector needs to reach the 2030 target. In addition, Prime Minister Modi announced an ambitious Rs100 trillion (US$1.35 trillion) national infrastructure plan in his Independence Day speech on 15 August. The plan aims to make India energy independent by 2047 by cutting reliance on imported fossil fuels and expanding the use of cleaner fuels, which would also help the country achieve its climate goals.

Given this huge investment potential, the stable economy with a democratically elected government, and the government-backed matured but still growing clean energy generation sector, India provides a tremendous investment opportunity for global investors.

In November 2020, BlackRock CEO and co-founder Larry Fink forecast a “seismic reallocation of capital”. This is now occurring with more than US$40 trillion primed to invest in climate-friendly assets. India is a large emerging economy that already provides significant investment opportunities in the clean energy sector and can offer a ‘home’ for vast amounts of foreign capital to meet its highly ambitious climate targets.

Green bonds are playing an increasing role in financing these climate targets. 2021 has seen new records set both in terms of the amount of capital mobilised through green bonds and their low coupon rate (interest rate paid by bond issuers).

Azure Power Global Limited (Azure) recently raised US$414m via a green bond issued through Azure Power Solar Energy Private Limited, a wholly-owned subsidiary of Azure. The bond has been issued at a coupon rate of 3.575% which is the lowest ever coupon for any borrower out of India in the high-yield bond category. Azure will use the proceeds of the bond to refinance its 5.50% US$500m green bond issued in 2017 which is due in 2022. It is estimated that the refinancing would reduce Azure’s debt cost by 200 basis points (bps) in hedged rupee terms.

Azure’s green bond broke the record set by Greenko’s green bond for the lowest coupon of 3.85% p.a. issued in March for US$940m. These bonds are closely comparable. Both have six-year tenors and issuers backed by strong global financial institutions (Azure Power is 51% owned by CDPQ of Canada, while Greenko’s cornerstone investor is GIC of Singapore).

The average interest rates for green bonds have dropped by more than 120bps in dollar terms in 2021 compared to 2020 without major changes to the long-term credit ratings of the bond issuers. For instance, ReNew Power issued a green bond in January 2020 at a rate of 5.875% and its latest green bond, issued in March 2021, achieved a rate of 4.50% (138 bps reduction) without any change to its long-term credit rating. All the issuances in 2021 have been below a rate of 5%.

Bonds issued in 2020 and 2021 are currently trading at an average yield to maturity (YTM) of 3.90% except for Cliffton India’s green bond which is trading at a very high YTM of 6.52%. As per Nomura estimates, Azure’s latest green bond may trade at a slightly higher yield than the current YTM of 3.35% for Greenko’s green bond which is trading at the lowest YTM. The current average yields of these bonds are significantly lower than the effective yields at the time of listing, reflecting tightening in interest rate spreads.

The current downtrend in the yield to maturities, a forward-looking guidance metric, indicates that Indian clean energy borrowers would be able to raise subsequent green bonds as well as bank loans at even lower rates. Furthermore, it also gives equity investors confidence in the company’s financial sustainability as well as the company’s commitment towards clean energy project deployment. These benefits should eventually help Indian clean energy borrowers tighten their effective interest rate spreads and reduce their overall cost of capital. 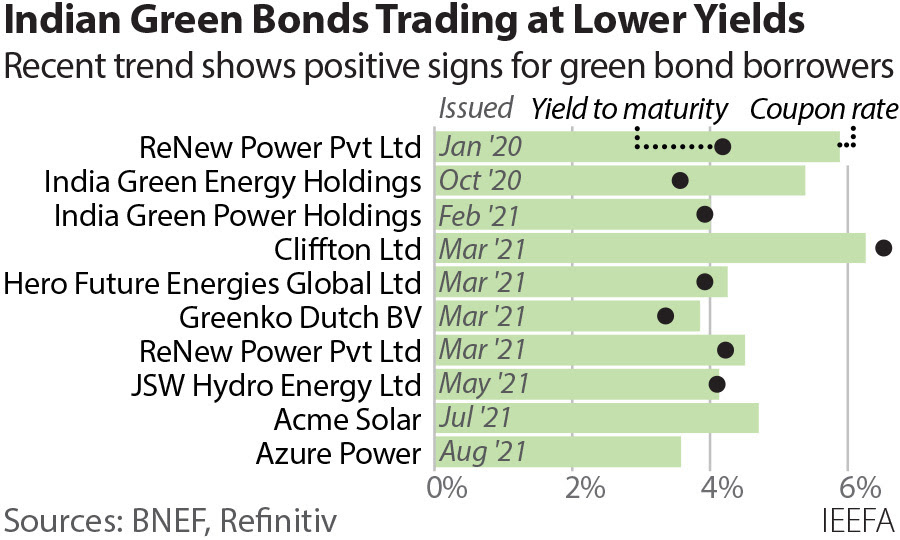 Indian green bond yields are going down primarily due to three factors: significant demand for green bonds and ESG-linked bonds in general; the quality of Indian issuers with significant experience in clean energy projects; and the low-interest rate environment globally.

Germany’s green ‘Bund’ is trading at an interest rate of virtually zero which is an indication of the low-interest rate environment in green bond markets as well.

If the yield curve of the green Bund vis-à-vis its vanilla twin is any indicator of lower yields existing in green bond markets, then a similar ‘greenium’ in prices of green bonds can be expected in other markets as well. In fact, there are several academic research papers that have provided empirical evidence that green bonds around the world trade at a higher price (lower yields) compared to their corresponding non-green bonds both in primary as well as in secondary markets.

Unless the current global macroeconomic environment changes significantly, the yields of green bonds will continue to go down like any other conventional bonds but at even tighter spreads.

However, in the current era of low long-term interest rates in OECD countries, global investors are seeking higher yields as well as greener pastures for investment. Indian green bonds offer the twin benefits of investing in climate-friendly projects and relatively higher and less volatile yields.

The yields are relatively stable because most of the underlying renewable energy projects in India are tied up by long-term power purchase agreements backed by government guarantees. This ensures a less volatile cash flow and thus timely debt service payments by the bond issuer.

The growth of green bond markets is also an indicator that capital is fleeing fossil fuels. It is becoming increasingly difficult for fossil fuel companies to raise cost-effective debt without serious, actionable plans for transitioning to a low carbon future. Investors in the green bond market are very wary of fossil fuel companies, or indeed any company that is associated directly or indirectly with fossil fuel activities. This is primarily due to the mainstreaming of environmental, social and governance (ESG) issues into investment decisions.