To View the Export Of The First Shipment Of Solar Panels To Greece: The Head of the Greek Trade Office Visits The Desert Technologies...

UAE Launches Etihad 7 Program To Finance RE Projects In Africa

Singapore Keen To Partner With UAE On Low-Carbon Economy

Tunisia Partners With Saudi Arabia To Develop RE

DEWA Raises Production Capacity Of A Project To 330MW

Since 2015 India has seen an economic growth of 6.7% per year on average and has successfully improved the life of hundreds of millions of citizens. Historically, India has only contributed to 3% of the cumulative emissions since the XVIII century. But as emissions from OECD countries are decreasing, several emerging markets see their emissions growing at a fast rate, and among them India is one of the most important.

Catching up with the HDI level of mature economies, while trying to control its emissions, and more generally trying to limit the environmental impact of its growth, India has to face many challenges at the same time. The good news is that there are already many technologies available to help the country, as well as international investors ready to partner with Indian consortium and bring additional funding to the table. 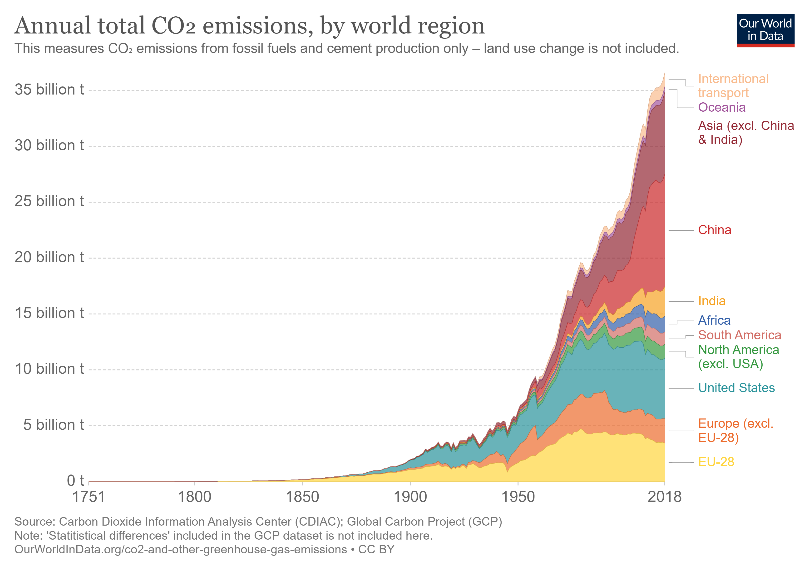 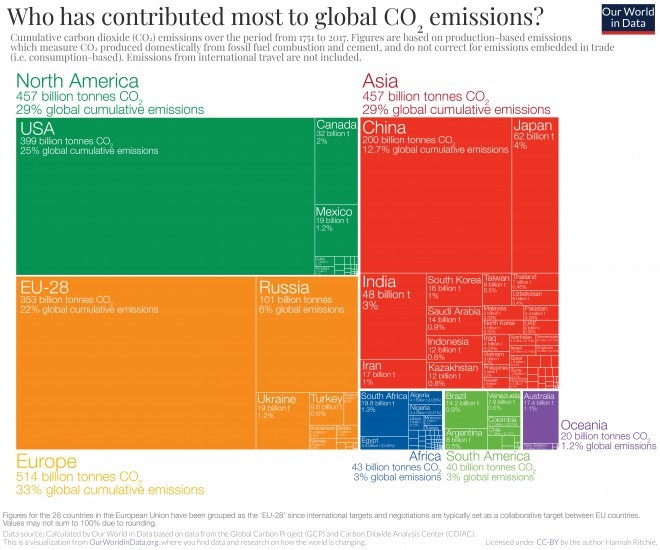 An outstanding result of recent policies is the connection of 50 million additional people – the equivalent of the Spanish population getting access to electricity – every year since 2015. Over 90% of the population now has access to basic water service.

As the population becomes more urban, there is a fast increase in use of appliances and modern cooking. The growth of the construction industry, to increase the number of buildings and city infrastructures, is therefore massive, with materials such as plastic, cement, steel, aluminum and chemicals.

The country has now the second largest in the world road network. And the fourth largest railway network, of which 50% is already electrified, with a target to have 100% of the electricity consumption equivalent being covered by renewables.

India has also put a strong emphasis on energy efficiency, in all segments of the economy. A good example is the LED program launched in 2015, the “Unnat Jyoti by Affordable LEDs for All” (UJALA) which has contributed to generate more than 54TWh/y of savings.

In the power sector, a most noticeable feat has been the development of renewable energy, which now provides 7% of the total generation, twice the share as in 2014. The average growth rate for solar has been 60% and 10% for wind, compared to 7% in overall installed capacity. Today installed solar capacity is slightly above 40GW and 39 GW for wind. 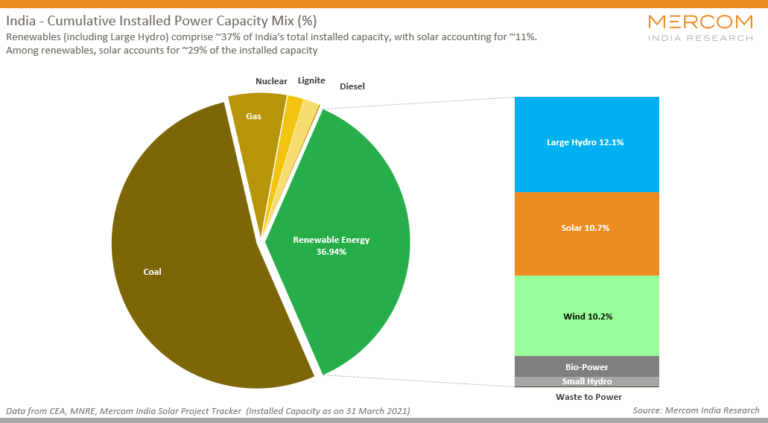 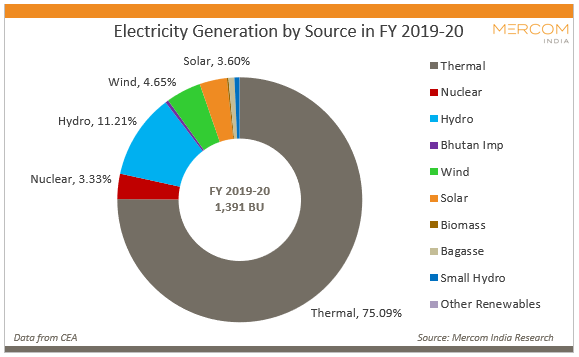 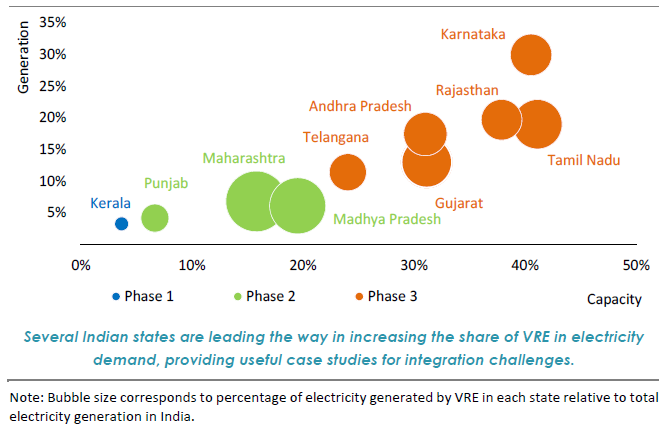 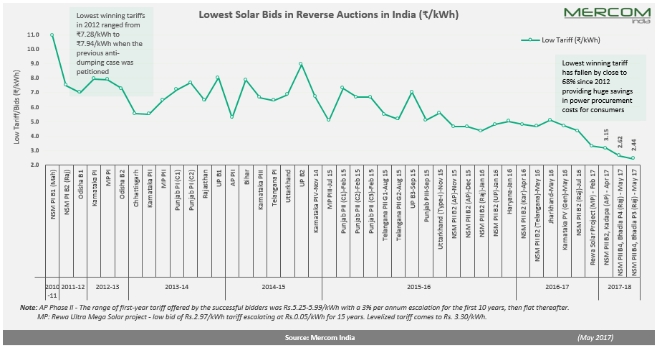 With Many Challenges Ahead

Despite these successful outcomes, challenges ahead are still many. Pollution in cities has reached extraordinarily high levels. Cooking still relies on traditional biomass and is responsible for close to 800,000 premature deaths in 2019.

Oil consumption has never been that high, and renewables have not been able to replace coal, whose use is still growing, especially in the industry. Coal remains 44% of the primary energy used in India, followed by oil and biomass. In fact, India has installed more coal-fired plants than renewable during the period 2015-1019 (58GW vs 49GW). Coal only uses half of the railway capacity available for commodity transport. 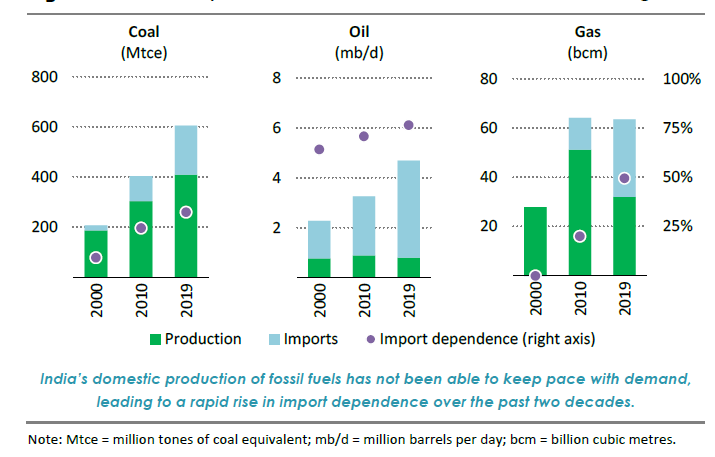 India is facing incredible challenges in keeping pace to supply the necessary infrastructure for its growing population which is becoming more urban with access to basic infrastructure: in the past three decades, the transport sector has increased fivefold, leading to pollution, road congestion and higher dependency on oil, on which it relies at 95%. About 75,000 vehicles per day of all types are sold. And 2/3 of the buildings which will exist in 2040 in India, have yet to be constructed. This shows the massive growth of industries and services, and all associated activities which will be important drivers for the energy demand in India.

The development of renewables, although spectacular, has been way below the initial targets announced in 2015 of 175GW by 2022 (vs 80GW in 2021). There are numerous reasons for that, among them:

What’s next? India and the Energy Transition

I would like to discuss 3 elements in this section:

There are numerous scenarios which have been built in the past years, and certainly more will come in the future, as technologies and regulations evolve.

The IEA has proposed 3 different scenarios: STEPS/SDS/IVC. IVC takes an optimistic view that all political announcements and targets are met, but national and international. STEPS is a more pessimistic/realistic view concerning these commitments. SDS takes a different approach: it’s a scenario based on achieving certain environmental targets (UN SDGs for example) and see the milestones that need to be achieved backwards. 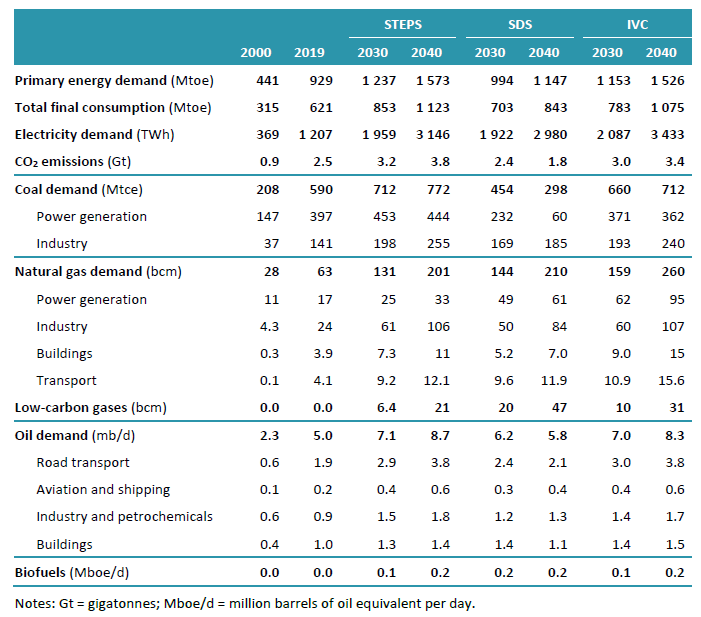 There are few remarks which can be drawn from these scenarios:

Another interesting scenario was proposed by Climate Trends (India) and LUT University (Finland). They have simulated a 100% RE scenario for Northern India. The map below shows the interconnections and exchanges between states, the evolution of the final energy demand and the CAPEX planned, as well as the LCOE of the system achieved.

It shows that by 2050 it is feasible to achieve such a system, with a very competitive LCOE. The technological deployment is massive, and solely focused on clean energy. It gives an idea of the investment amount at stake:

The total annual system costs increase from around 120 bUSD in 2020 to over 190 bUSD in 2050. These amounts cover all major sectors: power, heat and transport. Capital costs are well spread across a range of technologies with major investments for solar PV, batteries, heat pumps, and synthetic fuel conversion up to 2050. A majority of the investments are in the later periods of the transition from 2035 onward, as the energy system requires more flexibility solutions with higher shares of renewables

Fuel imports and the respective negative impacts on trade balances will fade out through the transition, as e-fuel starts to be produced by 2045, leading to great energy security

System LCOE can reach a cost as low as 41USD/MWh by 2050 and is increasingly dominated by capital costs as fuel costs continue to decline through the transition period, which could mean increased self-reliance in terms of energy for North India by 2050.

As electrification will play a key role in the decarbonation of the Indian economy, the development of renewable energy is of utmost importance. These technologies have the potential to positively disrupt emission trends, fossil uses as well as the social, economic and technological environments in India.

As they continue to develop, they will become cheaper and cheaper, making them the number 1 choice in all investment decisions, and allowing them to be integrated in all sectors, in particular transport and industry. Their development also drives innovation and industrial policies and therefore the regulatory environment should provide a whole integrated approach.

It is key that these technologies reach a point when they become naturally the cheapest option. This situation is very near to happen in India, as new coal projects are above 55USD/MWh, existing between 35-40USD/MWh, and solar + batteries around 40USD/MWh. 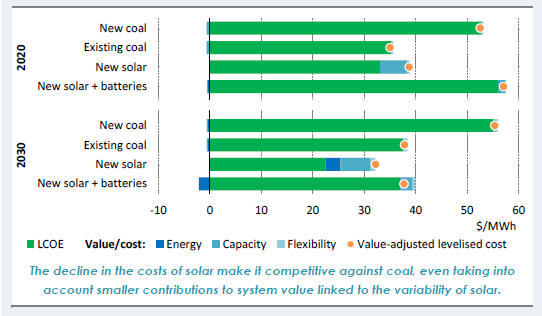 IRENA Coalition for Action, in which Dii Desert Energy is an active member, has recently published a white paper suggesting a few key drivers for the current decade.

I will quote some of the key elements below:

The social and energy transformation of India is under way. In all scenarios, renewable and electrification will play a leading role in providing both the fuel for its economic development and decorrelate emissions for GDP growth. Still, even in the most optimistic scenario of the IEA, GDP in 2040 is four times the GDP in 2019. 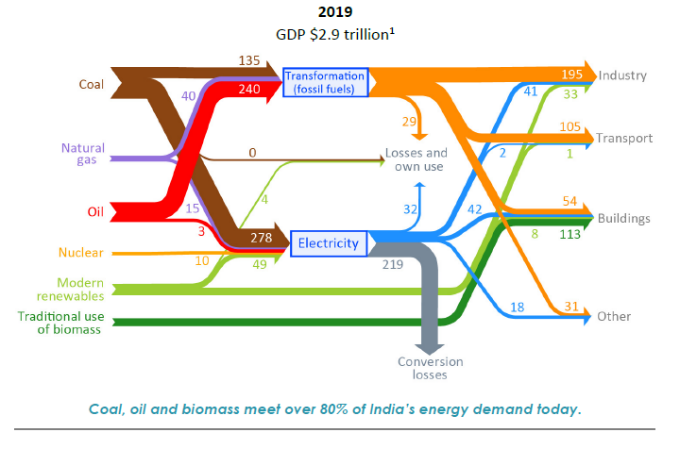 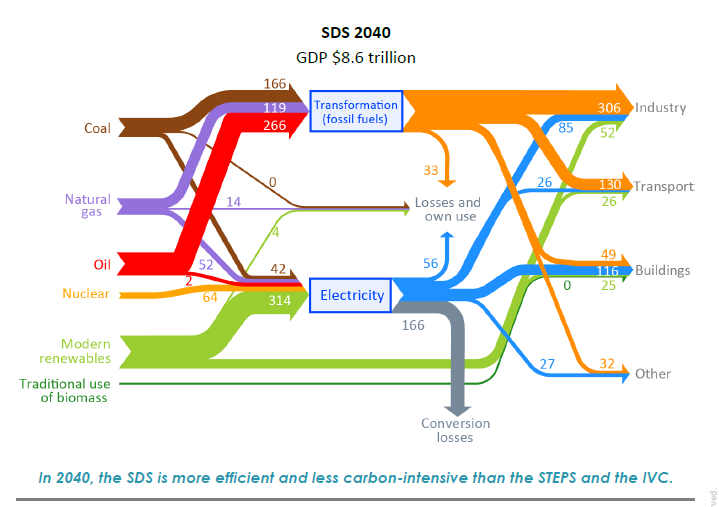 Massive industrial development, infrastructure (road, buildings), material consumption are required to reach this stage. Decarbonizing its economy in the coming three decades, while improving its HDI and managing its population growth of 1.3% per year – expected to peak close to 2050 – represent an incredible challenge. If India is set to follow the same path of more mature economies, then increasing its IDH will come in conjunction with an increase of its ecological footprint, as shown in the graph. 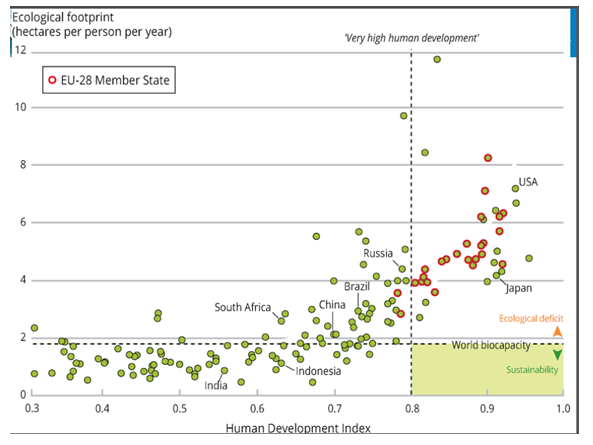 Finding new social models, where growth would have a different significance, would alleviate the environmental pressure which will be exercised, but also alleviate the financial burden on the economy. These strategies could rely on 3 main pillars:

All eyes have been on India during the past decade, and the country has been internationally acknowledged as a successful example of an innovative and ambitious policy in developing renewable energy. India is home of the International Solar Alliance, which is supporting a worldwide development of solar and backing several initiatives in emerging markets. Large successful renewable energy platforms have been created, in joint ventures between international players, such as energy companies, private investment funds or pension funds, and local industrial groups. A large portion of the value chain is located in India, with some companies belonging to Tier 1 groups. Project finance is well developed, and the size of the market is attractive.

When looking at the challenging ahead, India could in the future also capitalize on this success, and develop new types of international collaboration, be it technical or financial, not only to strengthen the development of renewable energy, but also to develop other sectors such as construction, urban planning, transport, and provide attractive frameworks to foster these collaborations.